The House committee passed out HB2445 on Thursday.  We expect it to hit the floor of the house Monday or Tuesday.

Here is the money part of it.

For comparison purposes, the State BOE asked for these bases:

You will note that while they are attempting to get back to the Montoy last adopted base and update it for inflation, which is what the State BOE asked for, this plan comes up $372 short even after five years.

After the five year phase-in, they plan to apply a CPI adjustment annually. Despite having a CPI adjustment in the statute for many years, it has never followed it in the past. They have simply ignored it.

Only one year, FY19, is appropriated.

You will note that this looks like $533M of new money. It is not.

Inflation is not included in the plan until after the five-year phase-in. Inflation in the system at 1.5% amounts to $70M per year. During a five year phase-in, the plan falls $350M behind just due to inflation.

Because inflation is NOT included for five years, the amount of new money is actually only $183.4M.

That being said, we do not oppose HB2445, but we are NOT claiming that it fixes the problem. We do not oppose it because, incrementally, it helps the schools. Think of it as fixing the mess in several steps. This is the first step.

The supreme court rejected SB19 last year because all other evidence pointed to much more money being needed. Last year the comparison was $293M on a $893M problem. The court cited the $293M as being an “outlier” and declared SB19 unconstitutional.

This year, HB2445 is also an outlier… a bigger one. See the chart below. 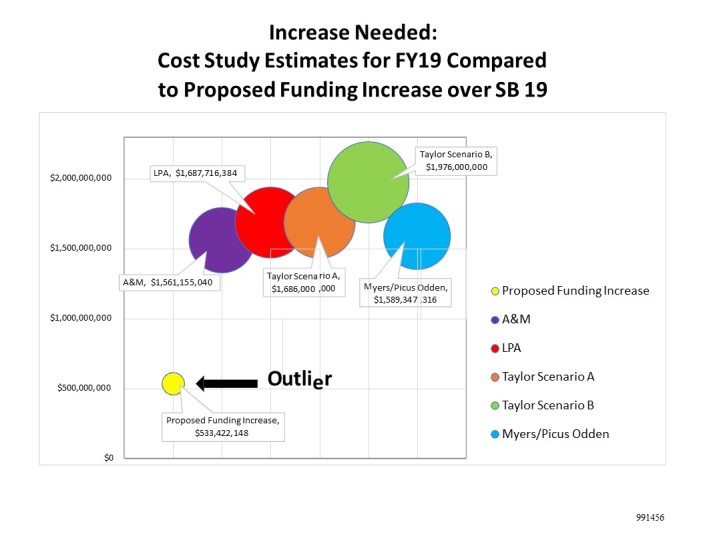 ” Budgets are a reflection of priorities, and it’s worth noting that some states are taking a very different approach. This week, California Governor Jerry Brown proposed increasing spending on pre-K education by $22 billion over the state’s 2011-2012 budget.  According to the Los Angeles Times, “schools that serve low-income students and non-native English speakers will receive more money under the formula… Under Brown’s plan, LAUSD would see its per-pupil funding jump from about $7,700 per student per year to $12,750 by the end of the decade.”