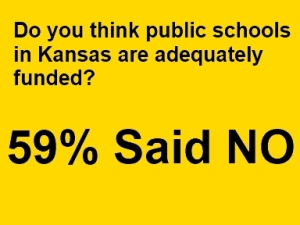 A new poll out today shows that by a wide margin, most Kansans believe public schools are underfunded and want the Kansas Supreme Court to step in by ordering more funding.

The survey by Public Policy Polling, a Democratic-leaning firm based in North Carolina, found 59 percent of those responding believe that public schools in Kansas are not adequately funded, and an equal number think the Kansas Supreme Court should rule that funding for public schools needs to be increased.

Read the complete story at: http://www2.ljworld.com/weblogs/first-bell/2014/feb/21/poll-shows-most-kansans-want-court-to-or/